A speck just off the shore slowly resolves itself into a massive, rusting steel hulk as we thread our way through the narrow channel into Bahia Honda.

“I don’t know. There are supposed to be a couple fishing weirs at the entrance to the bay.”

I pick up the binoculars, study it closely.

“That’s not a fishing weir.”

We’ve finally left Havana and are making our way slowly west along the north coast of Cuba. A shoreline studded with smokestacks and the smell of heavy industry has slowly given way to mangroves lining the shore, a mountain range rising behind them. We sailed past the first two “pocket bays” along the coast, heading for the unspoiled beauty of Bahia Honda. But it’s not completely unspoiled. We can see cranes inside the bay. And what is this thing we’re looking at?

“A ship gone aground?” I ask Chris.

“It’s certainly as big as a ship, but I’ve never seen one that looked quite like that.”

It doesn’t have a pilot house, just a series of little shacks along the deck. And the bow. There’s something not right about the bow. As we draw closer, we realize that the vessel, if that’s what it is, has two hulls. With only a skeleton of rusted steel holding them together.

“I think it’s a dry dock,” Chris says. He’s right. The guide book confirms that it’s an old floating dry dock, run aground at the mouth of the bay. Bahia Honda’s main industry is a large metal scrap yard that strips and tears apart old ships. We pass a huge barge run aground on the shore, slanting sharply into the water. Several ships in various stages of decay, many of them aground. Tangles of rusted steel jut out of the water, the bow of a ship, the remains of a stern, something entirely unrecognizable.

“This place looks like a ship graveyard,” I say to Chris, as we pass more rusted boats, long stripped clean of anything of value and slowly being claimed by the sea. They’re beautiful in the late afternoon sun, in a sad kind of way. We come as close as we dare to a ship that looks like it could still be floating. I try not to think of what its last journey might have been like. Most probably it was towed here, but maybe it came in under its own steam.

We had our last supper the day of the beaching
She’s a dead ship sailing, skeleton crew
The galley is empty, the stove pots are cooling,
With what’s left of the stew.

I think Mark Knopfler’s song “So far from the Clyde” is the saddest song I know. It’s a poignant ballad about a ship from Scotland making its final journey to be beached in some third-world country, then stripped down and cut apart for scrap. 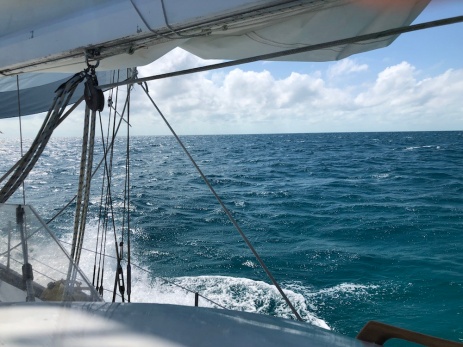 I can’t bear to think of what Monark’s fate will be. I have come to love this boat more than I ever thought possible. It happened gradually, I think, as we sailed cautiously through miles of thunderstorms off Antigua, pounded into the seas as we headed from Bermuda to the Azores, were pummeled by not one but two gales just before making landfall at Flores. Monark gallops through the roughest seas, slices through the waves, the sea breaking over the bow, water streaming out through the scuppers. In cross seas the boat rolls, rights itself, rolls rights itself. This is nothing, I can handle this. Bring it on.

I accept all of our boat’s quirks—the ever-leaking forehatch that regularly drenches the V-berth in salt water, the fragile drive train that can’t handle much more than 1800 rpm, the rust, oh the rust, that weeps constantly from under the cap rail, from the anchor locker, from many of the deck fittings. It’s a full-time job trying to stay ahead of it. But that’s just part of having a steel boat.

We have lovingly scraped and painted the bottom in boat yards around the world—in Canada, more times than we can count, in the Azores, in southern Portugal. We know every inch of the hull, feel grateful as we fair the occasional dent, apply a fresh coat of bottom paint. We’ve thought of other boats, lighter boats, faster boats, boats that require less maintenance. But we wouldn’t trade our sturdy steel boat for the world.

Who among us ever really knows when we’re on our last journey. Chris and I know we can’t sail forever. You may be surprised to learn that we’re not actually getting any younger. Neither is Monark, but I like to think that with loving care, the boat will go on forever, will never be just a stain on the sand somewhere.

Stripped of her pillars, her stays, and her stanchions
When there’s only her bones on the wet poisoned land
Steel ropes will drag her with winches and engines
Till there’s only a stain on the sand. 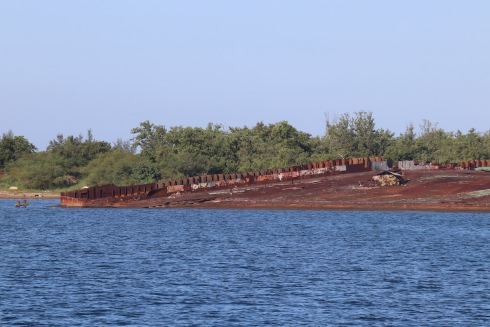 5 thoughts on “So far from the Clyde”