Three months and I haven’t written a word here. But that’s what summer is like when you live on a sailboat—on any given day I would rather be out walking around the island than sitting at my computer. Or sailing. Not that we do much of that.

Chris came home from work one afternoon in July with the news that he’d invited one of his colleagues to come sailing.

We hadn’t left the lagoon since we arrived in April, had been busy varnishing and installing the new heat exchanger and rigging the new car system on the mast and I can’t even remember what else. MonArk is a floating repair project, not a sailboat. What was he thinking?

Tuesday night, he finished repairing the exhaust manifold, came out of the engine room wiping his hands.

Not quite. Wednesday morning he headed off to work and I began the long process of turning our floating home back into a sailboat, stowing everything breakable, latching all the lockers.

But it was worth the effort. Chris’s colleague and his wife have two absolutely charming little girls, who delighted in walking the gangplank to board the boat, something that gives most people pause, then asked politely for a tour. I showed them how to climb down the companionway ladder…and the questions began. How do you cook? Do you have a fridge? Where do you sleep? Where do you keep your clothes? Is there a toilet? And on and on. It was so much fun. We could hardly get them to come above deck so we could get going, they were so happy latching and unlatching the cupboards, and the toilet! Endlessly fascinating.

But we finally slipped our moorings and began motoring out of the harbour. We had just cleared the ferry dock when Chris said okay, let’s get the genoa out. Huh? We don’t usually sail in the inner harbour. Then he asked me to take the helm and I knew something wasn’t right. I surreptitiously checked the gauges while he went below. Sure enough, the engine was overheating. 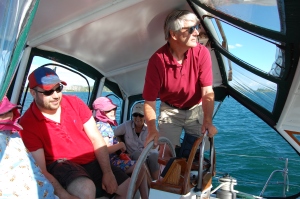 So we switched it off and sailed out the cut. It was fine until we had to make the turn into the anchorage, heeling way over as we came across the wind. I thought the girls might be frightened, but they loved it, braced themselves and leaned into it, laughing.

Once the anchor was down, I made hamburgers while Chris made some discreet engine repairs. (We’d forgotten to top up the coolant after replacing the exhaust manifold.) We were able to motor back to our moorings before the sun set. We call that a successful sailing adventure.

Our only one this year, in fact. We’ve been off on a bit of a lark most of the summer—a Meadowlark, that is. But I’ll save that story for another day.

Today, it’s a perfect fall day on the island, sunny, windy, sharply colder than it’s been. The leaves have started to turn, the beach is deserted again. When Bica and I came back from our morning swim (hers, not mine), I wrapped her in a big blanket to dry. Then I strolled over to the Island Café to get myself a coffee and maybe a delicious pumpkin spice muffin…but found it closed. Very sad.