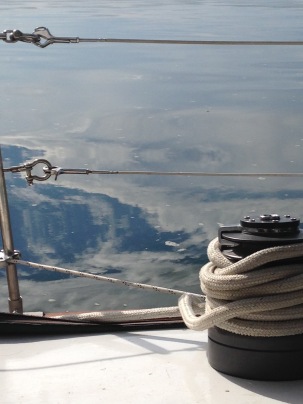 This morning we are motoring relentlessly towards Gaspé, over perfectly flat seas. We spent the last two nights in Rimouski, a place neither of us ever really wanted to visit, waiting out big winds and even bigger seas. A sailboat set out yesterday morning to cross the river and came right back.

“It’s bad out there,” the woman told us, her eyes wide, her grey hair pretty much standing on end.

We decided to stay a second night. Which gave Chris a chance to make not one but two trips to the great big Canadian Tire just a 20-minute walk away. Can’t remember the last time I’ve seen him this happy.

It’s been a long, slow trip down the St. Lawrence, plagued with electrical and mechanical and plumbing problems. We were forced to stop in Salaberry de Valleyfield just outside Montreal for a couple days while we had a new strainer for our cooling system couriered to us, and in Quebec City, Chris rebuilt the drive coupling, which was just hanging on by a thread, installed a new Y-valve in the head, tightened the fittings on the heat exchanger—you don’t want to hear the whole list, believe me.

I spent the time in Quebec City a little more pleasantly. I visited the farmer’s market in the old city every day—blueberries! strawberries! oh, the cheeses!—and did the wash, did a little boat cleaning (like house cleaning only you bump your head and your elbows a lot more.)

The stretch of the river between just before Montreal and after Quebec City is just as tricky as I had remembered. There’s no way a boat like ours can run against 7-knot currents (our top speed under motor is 5 knots), so it took careful planning to get from one safe harbour to another while the current was running with us. We managed, for the most part, though one memorable night the anchorage we were planning to stop at at Ile aux Coudres was untenable—there were (unforecasted) 25-knot winds blowing off the land and straight into the anchorage, so we had to carry on to the nearest harbour of refuge, a tiny place called Cap a l’aigle, which we had no choice but to enter in the pitch dark. Not something we want to do again any time soon. 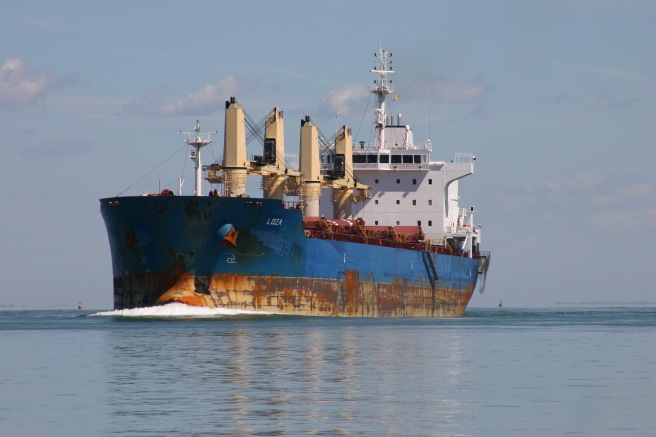 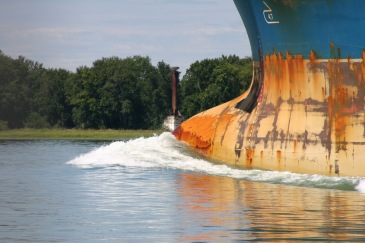 But we’re pretty much out of the big currents now that we’re past Rumouski, and there’s lots of room her for both us and the huge ships we’ve been sharing the seaway with since we entered the river just past Kingston. This is the kind of sailing we’re used to. Long distances and lots of sea room. Unfortunately we’re heading into an area of big winds in the gulf. And big seas—the waves are 5 metres today. Gulp!

Let’s see if we remember how to sail this boat.