The only way to get to Entry Island, the one inhabited island not connected to the other Îsles de la Madeleine by road or bridge, is by boat. You can come by ferry or private tour boat or you come in your own boat, like we did. Somehow, visiting boats have to find a place to squeeze into the tiny harbour with the resident fishing fleet—a dozen or so boats of various sizes, lobster boats, for the most part, but there are a couple big scallop and crab boats as well. It gets a bit, shall we say, tight? And the water in the harbour is not very deep so there’s not much room to manoeuvre.

The entrance to the harbour is hard to spot from the sea. Fortunately, the fishing fleet was returning when we arrived so we were able to follow one of the boats in. There was a big swell in the narrow channel, not to mention a big wake from the boat that had just gone in, but Chris managed to avoid both the breakwaters and suddenly we were inside—with no place to tie up.

Rafting off the fishing boats, who were busy unloading their catch, didn’t seem like an option. We were about to turn back and head out when one of the tour operators waved us into a spot on the far side of the floating dock. Was there enough water there, I asked him? We draw six feet and the chart only indicated four feet of water there. Yes, yes, he said impatiently. Chris did a three point turn in the narrow space between the fishing boats and the tour boats and we tentatively came alongside where the tour operator was waiting to take our lines. No problem. Six and a half feet, the depth sounder said. And we were at low tide. 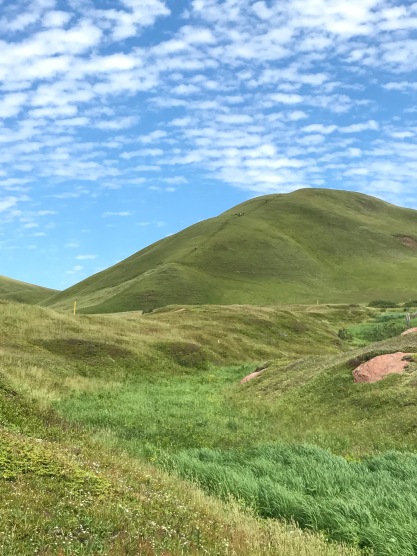 There’s lots to do on Entry Island, which is about two-and-a-half miles long and a mile and a half wide and has a population of fewer than a hundred. You can hike to the church. Or you can keep on going past the church and hike up the big hill in the centre of the island, called…wait for it…Big Hill.

We decided to climb big hill. On our way there, we passed a small sign saying “Farmer’s grave.” Up the sideroad we could see an abandoned farm, and behind it, a big white cross. Unusually big, for a grave. Must have been someone really special.

“That’s funny,” I said to Chris. “Why wouldn’t they have his name on the sign?”

Okay, it really is a big hill, but the climb to the top was worth it. The view of the islands was absolutely spectacular. So was the wind. While Chris happily admired the panorama, I held onto my hat, wondering how strong the wind would have to get before it would actually carry a person away.

We picked our way through grazing cattle as we made our descent. Big Hill is a huge common pasture, enclosed by an electric fence. We spotted what we thought was a dead cow in the valley below us, but as we came closer, we could see that it was a horse. And it wasn’t dead. It lifted its head as we passed by, but didn’t get up. Was it okay? We weren’t sure.

We stopped at the little museum at the foot of the hill, told them about the horse, which I started to describe.

“Oh we know which one you mean,” the woman said. “There’s only one horse on the island. And it was okay an hour ago. The last group of hikers said they tried to approach it and it ran off.”

But Entry Island wasn’t always a one-horse island. At one time it was home to a number of horses, including a famous horse named Farmer, who, after being sold to someone in Havre-Aubert, swam five miles to return to his home here, where he lived for the rest of his life.

“There is a big cross marking his grave,” she said, “on the road from the harbour.” Ah. Now it made sense. Not Farmer the farmer. Farmer the horse.

We’re staying here another night as we wait for the winds to go west so we can carry on with our eastward journey. Maybe tomorrow we’ll hike to the church again. Or up Big Hill. Or maybe we’ll take a closer look at Farmer’s grave. The choices are overwhelming.