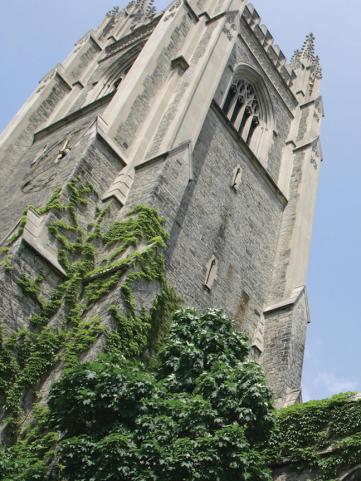 I’d heard that Hart House was haunted, so I was a little nervous about doing a radio interview there at ten o’clock at night. Chris and I passed under the bell tower with particular caution—more than one person has reported seeing a man who fell to his death while polishing the bells in the 1930s plummet from the tower and land on the pavement in front of them. The most disturbing part is that this apparition appears to be a flesh and blood human being, until he just disappears.

Fortunately, no-one fell at our feet. But the building was eerily quiet as we climbed the stairs to the third floor. I kept checking behind me for ghostly apparitions. So far so good.

We were surprised to find the foyer on the second-floor foyer occupied by a group of bored looking people sitting in complete silence. Not students, just… bored people. They weren’t talking to each other, they weren’t fiddling with their phones, they were just sitting there. Waiting for something. Bored, bored, bored. I’m pretty sure they were real.

As we started up the steps to the third floor, I turned and looked back just to check, and to my horror, the man in the end chair was missing half his head and his collar was covered in blood. How can you be that bored with half your head missing? We hurried to the studio, and once inside were informed that yes, we had seen a zombie. They were shooting a NetFlix movie on campus that night. We should be prepared to run into zombies everywhere.

Did I take a picture of the zombies? Of course not. You never know what will set them off. But I’m happy to report that they were gone (or were staggering around in the dark outside) by the time the interview was over.

Except for the zombies, it was a great experience. Valentino Assenza, a writer himself, asked great questions. I couldn’t believe the half hour went by so quickly. And I’m pleased to report there were no close encounters with ghosts or zombies on our way out. Though we did run into a group of people doing the tango in front of the Royal Ontario Museum. Toronto is a very interesting city.

Listen to my interview on your mobile device.