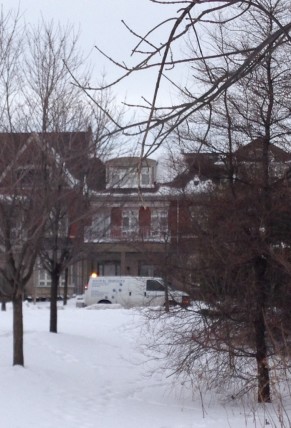 It’s back down to minus 18 again this morning but there’s no wind to speak of and the sun is shining weakly through the clouds. Not a bad day for a walk. Since we came across that poor Canada goose, Bica and I have been walking the other way along the lakefront, avoiding the river where the geese huddle on—and sometimes in—the ice.

But this morning we came across another creature in distress. I was ambling along, looking out over the lake at the big ice pack on the horizon, at the flock of buffleheads in the open water just off shore, when Bica came to an abrupt halt.

But she wouldn’t move. She was looking at a ball of fur huddled at the base of a tree. I stepped between her and the creature, leaned over for a closer look. A head popped up, grey face with a black mask. A raccoon. It had been chewing its right front paw, stared at me for a moment, then went back to work. Frostbite? What should I do? It looked skinny, and sick, actually—it’s fur all disheveled.

I turned around. On the street behind me was a white van with blue paw prints on the side. Animal Services. A woman in a blue uniform was calling to me.

“Is there a raccoon there?

“Yes,” I said. She opened the side of the van, pulled out a wire cage, a blanket, a snare attached to a long pole.

“I was wondering who to call. I didn’t know you came out for wild animals.”

She set down the cage on the path, arranged newspapers in the bottom of it, then approached the raccoon. It looked up at her but didn’t make any attempt to run away. Slowly, carefully, she started to slide the snare over the raccoon’s head. That got its attention. It tried to climb the tree, but it was so lethargic she had the snare around its middle before it got very far. Gently she removed it from the tree and dropped it in the cage, which had an ingenious sort of lid that allowed her to close it before removing the snare from the animal.

She tucked her shoulder-length blonde hair behind her ears and leaned over to have a look at it.

“What do you think?”

I backed up a few steps. Bica is vaccinated, of course, but still. She covered the cage with a blanket, picked it up.

“Is there anything you can do?”

“We can make sure he doesn’t suffer and doesn’t spread the infection. Distemper is almost always fatal.”

I understand. They’ll euthanize him. Which seems a lot better than chewing your own paw off.

You probably wish I had taken a picture of the raccoon, the Animal Services worker, the whole procedure. But I couldn’t bring myself to pull my phone out of my pocket. It seemed disrespectful somehow, to the raccoon, to the woman. I feel sorry for the raccoon, who has probably been euthanized by now. And a little relieved.

But mostly I feel grateful to the woman for taking care of him.