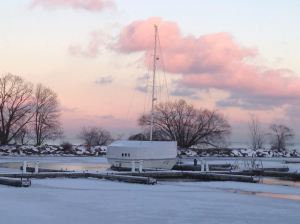 When we’re away from the boat, I always picture it all by itself out at the end of the dock, lonely, missing us, waiting for us to come back. But when we returned to the boat this morning, there were clear signs that life goes on here when we’re away.

The first thing I noticed was a set of tracks coming across the ice from the breakwall behind us, skirting the open water around the boat, disappearing at the edge of the dock in front of the boat, reappearing on the other side, and wandering off to the next dock. The snow around the tracks had melted too much for me to make out whose they were, but I think it could only have been a coyote—they were too big for a mink or a fox and I don’t think someone’s dog would be wandering around on the ice. Coyotes visit the breakwall regularly in the spring, raiding the nests of the Canada Geese who lay their eggs there. Maybe I’m not the only one out here looking for signs of spring.

The coyote may have been drawn by the dead fish that has appeared on the ice beside the open water at our stern—minus its head. I’m thinking that’s probably the handiwork of the mink I’ve surprised on the dock a few times this winter. I don’t know why it only ate the head. The rest of it looks pretty good to me. But clearly the mink and the coyote know something I don’t.

There are signs of human activity out here too. Someone has carefully broken up the ice in front of the safety ladder. I’m grateful for this—once it really sets in, it’s impossible to break. Was it someone from the marina, I wonder? No. I haven’t seen a marina worker on the docks since before Christmas. I think they hibernate. One of our neighbours, then. It feels good to know someone is keeping an eye on things when we’re not here.

But here’s the most exciting thing that happened while we were away. The wind, the sun, and the rising temperatures combined forces to free the boat from the ice. We’re floating again! Well, I guess we were always floating, but we’re floating free now, not locked in the ice. We’re a boat again, not a cabin frozen against a dock.

As I write this, the wind is rocking the boat gently from side to side. The oil lamp above my head is swinging again, as it should, the lines are creaking, the fenders complaining about being squeezed between the boat and the dock.

All is right with the world.