Okay. Maybe not quite.

Fine: it’s not spring at all, but there are hopeful signs.

For one thing, the ice is receding a bit further every day now. There’s a large pool of open water around the boat—our whole slip is free of ice, actually. And we’ve turned off the bow bubbler, leaving only the stern bubbler on to discourage ice from floating into our slip rather than harmlessly out into the lake. 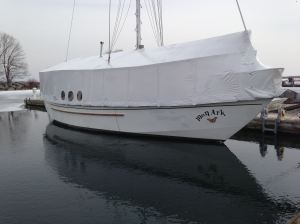 Three male mergansers are now sharing our slip with us, preening and fluffing themselves up, scrapping, each trying hard to chase the other two away. There are no females around that I can see. Maybe they come later, once the winner has been decided. Hey, look at this slip, baby. Nice, eh?? And it’s all mine. Well except obviously for this sailboat.

Plus five this morning, according to the weather network. But minus five with the wind chill—I must remember to look at that before we set out on our walk. I wore my spring coat today, which I’ll admit now was a mistake, and my running shoes. It was so nice to walk without heavy boots on. Bica shivered along beside me. Okay, maybe it was a bit early for her spring haircut, but she’s all ready for the warm weather when it comes. 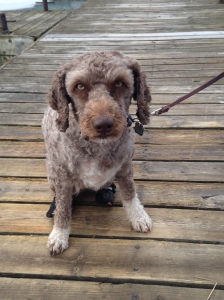 We walked north along the waterfront, keeping the strong northwest winds at our back. The huge banks of snow that formed along the shoreline have diminished but not disappeared—they are smooth black lumps now, rotten looking, ugly. You’ll be glad I spared you a picture.

I had originally planned to walk all the way to Adamson Estate, which is several kilometres away, to help myself to some forsythia cuttings, if there was no-one around, but we only made it as far as Tall Oaks Park, which is much closer. One of the oaks is a little less tall this morning—it was damaged in the winter storms and now it’s gone. But there’s no danger of tripping over the stump… They’ve painted it a bright orange. I’m not sure that a missing tree is a hopeful thing but the fact that spring clean up has begun is promising. 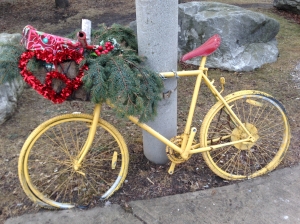 We started back to the boat, walking briskly into the wind, my nose running, my eyes full of tears, Bica’s ears blowing straight up, which is cute but must be cold and certainly makes the world a lot louder. On the way we passed a bicycle which was also confused about the season. Is it Christmas? Valentine’s Day? It just wasn’t sure.

And now we’re back, and my fingers have more or less thawed out (I wore my spring gloves, also a mistake). The wind is picking up and the boat is rocking wildly. This just might be a read my book at Starbucks kind of day.

But spring is just around the corner.