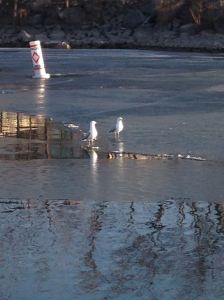 We’ve had several days of warm weather—though it still goes below freezing at night—and much of the ice has left the harbour. It’s been an odd spring. Because it’s warming so gradually (almost imperceptibly???) there has been no sudden melt, no great rush of ice. It’s just dissolved slowly. All that’s left now are a few patches of ice so thin they can’t support the weight of a Canada goose. Though they can hold a gull. Or two.

We’ve pulled our bubblers, scrubbed a winter’s worth of grunge off of them (fine, Chris scrubbed, I watched, but I think moral support counts for a lot). Although there are no buds on the trees yet, no signs of spring flowers (except the ones I’ve brought home from the grocery store), our list of boat chores has suddenly blossomed. Our biggest job this spring will be replacing the teak on the aft deck, then the whole deck will be as good as new. Better maybe. We’re gluing it down and screwing it, which is a lot of work, but I don’t think it will lift again. At least not anytime soon.

I’m also hoping to varnish the starboard cap rail before we head back to Toronto Island, but that may not happen. Before we leave Port Credit—in less than a month, we’re hoping, but we’ll see—I have to spring clean the boat from bow to stern, empty out every locker and get rid of a winter’s worth of things we’ve stashed away, replace our sweaters and parkas and boots with raincoats and running shoes. The list goes on and on.

But I’m not sure I’ll have time for any of this. Yesterday I bought myself an expensive pair of running shoes and some running pants (and socks) from Lulu Lemon. I am now financially committed to learning to run, which is something a person should just know how to do, but I’m hoping to figure out a way to run further than forty feet without gasping for breath.

The nice man at the running store said to run for a minute, walk for a minute, then when that became easy, run for two minutes, walk for a minute and so on. But how you run while looking at your watch is beyond me. Surely that’s a recipe for disaster. So I’ve measured out a route along the waterfront trail. I’ll walk for three lampposts, run for three, then build up my running time from there.

So check back here in a few weeks’ time. There might be a really nice pair of running shoes for sale.

One thought on “Racing into spring”