It’s been a while since I’ve written here. I’ve been plugging away at boat chores—literally. As I mentioned last time, our big job this spring has been replacing the teak on the aft deck, which involves ripping out the old, thin teak and the plywood it was glued to with a crowbar, grinding and applying rust check to the now-exposed steel deck (a 20-year old steel deck on an ocean-going sailboat should never see the light of day…), then applying a thick layer of glue, carefully laying new teak boards down, and screwing them in place.

You may think that’s the end of it, but it isn’t. Then the real work begins. About a mile of painter’s tape has to be applied to the boards, black caulking squeezed evenly (with luck) into the seams between the boards, and when all of that is dry, the plugging begins.

The screws that hold the deck down have been countersunk, and it’s my job to squeeze a little dibble of wood glue into each hole, tap a teak plug into it, and when it’s dry, saw the plug flush with the deck. Did I mention there are 207 plugs on the aft deck? 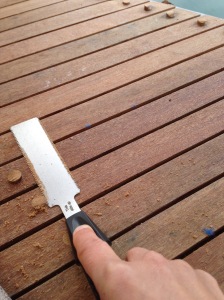 I actually like plugging the deck. It’s one of those jobs I can do completely on my own, at my own pace, pausing to watch a little pair of eared grebes swim past the stern of the boat, to watch the swan wars going on in the harbour. With great honking and flapping of wings, the males compete for the females, for the best nesting spots. It’s quite a show.

And I listen to the radio while I work. In fact, listening to pop music is a requirement when you’re doing boat work. Shut up and dance with me! As is drinking coffee. I stop from time to time, take a sip, look at the sky, admire my handiwork.

Although it’s snowing again today, just a bit, the sun shines between flurries and the harbour is now completely clear of ice. And the surest sign of spring? The water has been turned back on. We have to carry all the water we use through the winter, every bit of it. Filling the water tanks is a weekly chore neither of us particularly likes, but now the water is back on I can fill the water tanks with the hose whenever I feel like it. I’ll admit I’ve been using water with gay abandon, washing up the dishes after every meal rather than waiting until the end of the day, helping myself to steaming buckets of water to wash the windows, the floors. Such a luxury.

This weekend Chris’s sister is coming to help us take the cover off the boat and next week we hope to move the boat to Toronto Island. We’ve made it through another winter.