The list of boat chores this morning is long—troubleshoot trilight, install AIS, rig radar reflector, order spare carburetor kit for the outboard. But what is Chris doing? He’s on shore, helping his new friend Henri make some repairs to his trebuchet.

Yes, there’s a trebuchet on shore here, two of them, in fact, tall wooden structures that use a swinging arm to hurl things at enemies—rocks, for the most part, or whatever’s at hand.

Chris and I had spotted the trebuchets from the anchorage when we arrived, assumed they were part of the historical site of La Grave on shore here, which is not a burial ground, as the name suggests. It comes from the French word grève, which means pebbly and sandy terrain. La Grave is a thin spit of land with beach on both sides, lined with fishermen’s shacks that have been converted into little shops and cafés. Heaven, in other words.

Henri, who worked in the salt mines here on Îles de la Madeleine for 36 years, uses concrete balls—with a line and a float attached so they can be retrieved. He has made 250 shots at a wooden target—the castle, he calls it—out in the bay. He has to row out and repair it every time he hits it. His record is 928 feet.

“With the wind behind,” he says.

The trebuchets are just one of Henri’s retirement projects—I was afraid to ask about the others.

“Do you shoot English ships trying to enter the harbour?” I asked him.

“English, French—I don’t care,” he said with a grin.

We are in the marina here at Hauvre Aubert now, after a couple of frustrating days at anchor. Our first day here, the weather was so lousy—rainy, cold, big winds—we didn’t even try to go to shore. Couldn’t have, actually—we were too busy dragging around the anchorage. Sure the cove here is sheltered from seas in all directions, but the low dunes do nothing to stop the wind, and the bottom is soft mud, very bad holding. Our superior Rocna anchor let us down for the first time ever.

It had calmed enough by the second day for us to launch the dinghy, but after about an hour, Chris gave up trying to get the engine to start and we pulled anchor and went into the marina.

As soon as the boat was secure, we went to shore and walked along the strip, looking for a place to eat. Actually, I knew exactly what we were looking for: “the nicest terrasse on the islands,” according to the tourism website, where we could expect a warm welcome from owners Isabelle and François. “François is a musician, so you may expect a serenade at any time of the day… And at sunset, each day: a moment on the violincello on the terrasse… Magic!”

And it was. We sat on the terrace at Vent du Large, watching the sun slip into the sea while we sipped cold glasses of white wine and munched on cod cakes, listening to François play from Bach’s suites for unaccompanied cello, starting with the first piece, which I always think of as Master and Commander music, and which we played at our wedding. This is why we put up with heaving our breakfasts into a pail. To get to places like this.

The dinghy engine gave us an excuse to rent a car, so the next morning, bright and early, we set off in search of an engine mechanic. Réal, the dockmaster here, had directed us to the service station just up the road (the mechanic there looked at the engine in our trunk and just shook his head sadly) and to a garage in Fatima, on the next island. We drove along a narrow strip of road between the ocean and a massive lagoon. The sand dunes on the ocean side were tempting, but we were on a mission.

We couldn’t find the place in Fatima, though we were happy for an excuse to drive around looking for it. Finally we headed to the town of Cap-aux-Meules. According to our cruising guides, if you can’t get it there, it isn’t on the island. We couldn’t get it there. The Honda dealer, which sold outboard motors and claimed to be willing to repair any make, didn’t have time to look at ours until mid-July. The chandlery in town suggested that we try the Yahama dealer, but they were closed. Fine. Obviously it was time to go touring. 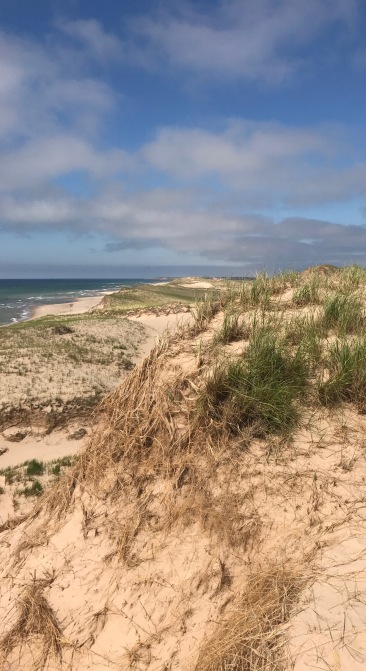 Sand, sand, and more sand, spectacular dunes and miles of beaches between the islands. On the islands themselves, high hills and steep cliffs, gray sandstone cliffs on the highest, volcanic islands, soft red sandstone cliffs along other shores, sculpted by wind and waves into fantastic shapes.

We drove the length of the islands, to Île de la Grand Entrée, the main fishing port, and what a busy place. We were so exhausted by watching the comings and goings of the fishing fleet, the one we sailed through on our way here, that we had to fortify ourselves with ice cream cones for the drive home. On our way back we parked the car, climbed the dunes, and looked out towards Gaspé, over the waters we had sailed. We could see the “offlying rock,” le Corps Mort, in the distance. The far distance. How far off does something have to be before it’s no longer offlying?

Home, exhausted, all the little stores closed (maybe another day.) We had a long hot shower, a lazy dinner on the boat, then fell into bed early.

The next morning, we rose early to go for a little hike before spending another day in the car. Butte des Demoiselles, two rounded hills with spectacular views of the islands, are within easy walking distance of the marina. We encountered a family of foxes as we climbed, who watched us from the deep grass, ducking down or running off if we stopped to look at them. Then it was off to the Yamaha dealer in Cap-aux-Meules.

Desolé, but he couldn’t possible look at our engine until next week. He did, however, say that it sounded like a problem with the carburetor, so armed with some carburetor cleaner and some ether for good measure, we headed back to the boat.

Cleaning a carburetor is a one-man job, thank goodness. So I left Chris sitting on a stool on the back deck, the engine in pieces around him, and headed off to explore the shops. (Finally!!)

There are a few “souvenir” shops here, masquerading as artisan boutiques, but most of them are the real deal—handmade clothing, jewelry, soap. Lots of local artwork, paintings and sculpture, and a few other things—nautical clothing, oils and vinegars infused with herbs grown on the islands. 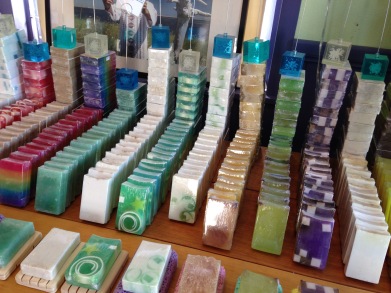 I bought more handmade soap than a person really needs at one store, a couple of hand-printed postcards in another, little gifts for family members whose birthdays we will miss this summer, a little gift for me: a pair of earrings, polished pink stones set in silver with a matching necklace.

I chatted with the young woman behind the counter as she wrapped my purchase. She had very cool hair, a couple of tiny braids mixed in with the rest of her shoulder-length brown hair which was swept up in a messy bun. How I wish I could master the messy bun. Whenever I try it I just look like a middle-aged woman who did a really bad job of putting up her hair.

I asked if she was from these islands and she said no, she was from Quebec City. She asked where I was from, and I said a sailboat docked in the marina, told her a bit about our life. Her eyes lit up. She travelled in India for three years before settling in Quebec City for a year. She couldn’t stand it there. All the tall buildings.

“I have always wanted to be in the middle of the ocean. There is nothing. And there is everything.”

I returned to the boat to find Chris lowering the engine onto to the dinghy to test it out. He had single handedly rebuilt the carburetor, without damaging the gaskets, which is a good thing because we didn’t have any spares. After a couple tense moments, success! The engine started. We decided to take it for a test drive—a big test drive, over to Sandy Hook (does every place have a sand spit called Sandy Hook?) The walk on the beach in the wind and sunshine was absolutely glorious. The sand squeaks when you step on it! So much fun. Here’s a video showing how to get maximum squeakage. 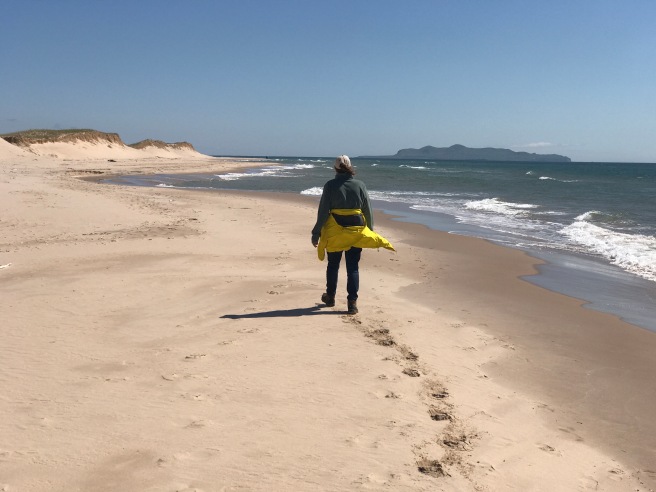 The dinghy engine now runs better than it ever has, so we decided to celebrate by going out to dinner at Café de la Grave. It’s a great little place in the building that used to be the general store, and they have live music most nights—that night it was a piano player, but as happens here, at one point a man with an accordion came and played a few songs with her, then another man wandered over and sat down beside her and sang some local songs, the whole restaurant joining in. We felt a little self conscious, being the only ones who didn’t know the words. But people smiled at us warmly, we felt very welcome.

Okay, I try not to obsess about food, but allow me this. The pot au pot, as they call it here, was just so good! It’s a sort of seafood pot pie, huge chunks of lobster and scallops and shrimp swimming in creamy sauce topped by a thick pastry crust. Mmmm. I’m hungry. I wonder if they open for lunch?

What’s Chris up to… I poke my head above deck, look over at the trebuchet. It’s swinging wildly—clearly they have just fired it. Another success! Maybe we should go out for dinner again tonight!

Because we’ll be back to eating on the boat for a while now. Tomorrow we’re going back out to anchor, then we’re going to tie up for the night, if there’s room, at Entry Island, the one offlying island here, before setting off for Cheticamp in Cape Breton. Or maybe Prince Edward Island. It depends which way the wind blows.

Wherever we end out, we’re hoping it will be a little warmer there. Here on these tiny island out in the middle of the Gulf of St. Lawrence it’s been cool, cold even, some days, the temperature never rising much above 15 degrees, the wind making it feel much cooler. Maybe we’ll even be able to break out the shorts!