It’s not a term I’d heard before, but I’m certainly familiar with now. We’ve never sailed in the ocean during hurricane season, so studying forecasts from the National Hurricane Centre has never been a morning ritual. But it is now. Actually, I check the forecast several times a day. And in the middle of the night. I’ll admit that it’s turning into an unhealthy obsession. Sometimes Chris hides the iPad.

Hurricane forecasts are based on computer models, satellite data, and the actual movement of a particular storm. The cone of uncertainty, which represents the probable track of a storm, is designed to show that the further out the forecast is projected, the less sure anyone is about a storm’s track.

A couple weeks ago, some long-range computer models had Jose making landfall exactly where we were, in Lunenburg. So we left our comfortable mooring ball there and scooted ten miles up a nearby river to wait it out.

As we rounded the final bend in the river, a wall of derelict fishing boats and a huge old navy vessel loomed out of the fog.

“This can’t be right,” Chris said. 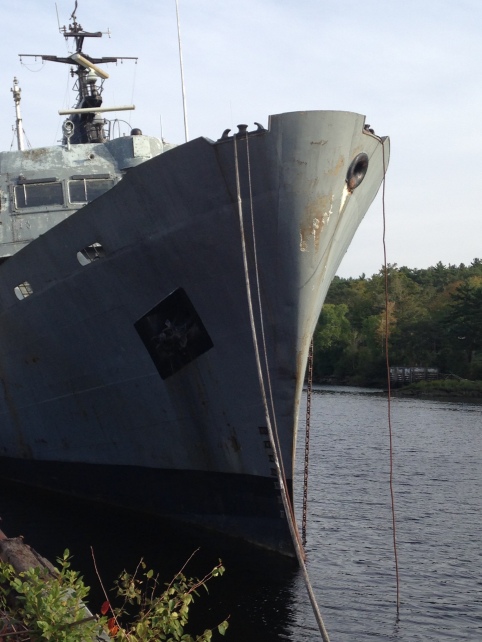 We double-checked the chart. Sure enough, we had reached the public wharf in Bridgewater, at the head of the La Have River. Ample room for visiting sailboats to tie up, our guide said. But there wasn’t. We circled a couple of times, then finally squeezed in front of the navy ship. Its grey hull rose high above our stern. I climbed onto the rough concrete dock and secured our lines around a couple of huge, rusty bollards. A flight of pigeons settled on the bow of the ship behind us, peered down through the gathering gloom. On the wharf beside us was an old steel sailboat, waiting for the cutting torch. Nearby were the remains of another boat, Just a transom and a couple of winches. It was a sad sight.

We spent a week in Bridgewater, in the fog and the rain, waiting for Jose—which never did hit Nova Scotia—to be downgraded to a tropical storm and head off to sea. Which he finally did.

But Maria was hard on his heels, with a massive cone of uncertainty that blossomed out into the North Atlantic. Forecasters were saying that Maria would miss New York and Boston, but might brush the tip of Nova Scotia and merge with the remnants of Jose before heading out across the Atlantic.

Might brush the tip of Nova Scotia. It’s the uncertainty that gets me.

Chris is pretty Zen about it all. He works on the boat, reads his book, flies his drone when the fog lifts. What’s for dinner, he asks. Another day has slipped by.

After Jose headed offshore and before Maria moved our way, we managed to sneak along the coast to Shelburne, a pretty little town near the southeastern tip of Nova Scotia. We’ve been waiting here for Maria to make up her mind, which she finally did. The night before last she passed well offshore of us and headed out to sea. But the wind in the night was unbelievable. I sat in the cockpit wrapped in a blanket and watched waves breaking around the boat in the anchorage, even though we’re a good ten miles from the ocean here. Then the rain came.

But this morning has dawned sunny—and sharply colder. It will take a couple days for the seas to settle down enough for us to make the three-day passage to Cape Cod, but it looks like we’ll be able to start heading south over the weekend. I’ll just check the forecast…

Wait a minute. Where’s the iPad?

4 thoughts on “Cone of uncertainty”