We had it all worked out. If we left the anchorage at the southern tip of Long Island Sound at 8am, we’d slip under Throgs Neck Bridge and start our run down the East River with the current in our favour. Our aim was to hit the aptly named Hell Gate at 10:30am, which would give us enough time to get out of the river before the tide turned against us.

Now the East River is not really a river. It’s a 14-mile tidal strait that begins in Long Island Sound and ends in New York Harbor. Eight bridges span it—all high enough for a sailboat to pass under. They’re not the problem. It’s the current, which can run as high as 5 knots. That’s our top speed under motor, so running against the current was not an option. Even running with it would require expert helmsmanship. Fortunately we have some of that on board.

We weren’t the only sailboat running the river—half a dozen of us entered the river at the same time, which was reassuring: clearly we had the timing right. We were moving along smartly at six knots, seven. In no time we were under the first two bridges, the waterway still nice and wide and more or less straight. 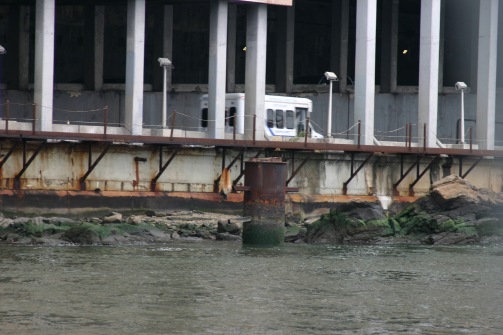 This part of the run was anything but scenic—old industrial buildings and abandoned piers, rows of rotting wooden posts jutting out into the water. Power plants, low-rise apartment buildings, a road running along the shore teeming with traffic. The odd ferry or water taxi crossed from one side to the other. A charter boat passed us, heading out to the sound, bristling with people and fishing rods.

The river doglegged to the left, ran straight again for a while. By now we were travelling at a heady 8 knots, buffeted by the current, but there was lots of room and little other boat traffic.

Now the bridge itself is lovely, an arched steel structure with stone towers at each end, built in the early 1900s. And travelling at 8.5 knots now, we were under it in no time.

Then a sharp dogleg to the right and we were in Hell Gate itself, where the Harlem River pours into the East River. It was a boiling, foaming mess. Chris wrestled with the wheel to keep us more or less in the centre of the narrow channel, while I watched the shore whizzing by, and then we were through the gate and into another long, straight stretch.

Whew. That wasn’t so bad. Chris was able to let the autopilot take it and we both relaxed a little. It was a grey, foggy day so we could barely see the Manhattan skyline emerging from the gloom.

But Chris was looking at the traffic ahead of us. Suddenly the river was thick with ferries, tug boats pushing huge barges, little fishing boats drifting with the current, all kinds of pleasure craft. A helicopter took off from a pad beside the river. There was a sailing regatta underway out in the harbour. Spinnakers bloomed as the boats rounded the mark for the downwind leg.

“Have you got that ferry?”

“Which one,” Chris said grimly. “The small one zipping in around the tip of Manhattan Island, the fast ferry coming up behind us, or the huge orange ferry approaching our bow?”

The big orange ferry—the Staten Island Ferry—passed within thirty feet of us, people smiling and waving at the little sailboat beside them. Little. That’s not how we usually think of ourselves. Whoa. A huge oil barge, painted red and tan, being pushed by a matching tug boat. More fishing boats to dodge. Then the open water of New York Harbor at last.

The Statue of Liberty saluted our successful passage as we sailed by, such a nice lady. We made our way easily through the many cargo ships anchored in front of her, waiting for clearance to go to dock.

Under the bridge at the narrows—oops, one more surprise for us: we were overtaken by about the biggest cruise ship we’ve ever seen—and then we were in the wide open bay beyond, the Atlantic Ocean not far in the distance, nothing but water between us and the Azores.

But that’s not where we’re headed right now. It’s too late in the season to think about crossing, so we’re back where it all started 13 years ago, almost to the day, tucked behind Sandy Hook waiting for the right winds to make our way south to the Bahamas, where we’ll spend the winter.

It feels so different this time. Last time, we had never been in the ocean in our boat, were both feeling a little daunted by the prospect. (Well I was. I’m not sure Chris is daunted by anything.)

We now have 10,000 miles of ocean sailing under our belts, but that doesn’t make us cocky. If anything, our respect for the seas is even greater. But then so is our confidence.