It shouldn’t, but it always amazes me that we can set out into the ocean, nothing but blue horizon ahead of us, and somehow make landfall exactly where we had intended.

This time we were aiming for a particularly small target—just a little eyelash of land in the Bahamas, if you can call a string of tiny islands that. The Berry Islands are somewhere between Nassau and Freeport, too tiny to even see unless you zoom way in on the chart plotter. And to get there from Florida, a journey of about 130 miles, you have to cross the Gulf Stream.

We had gentle winds from the south when we set out, so gentle that we put all our sails up: the main, the genoa, a staysail hanked onto the forestay (yeah, hanked: that’s what you do when you don’t bend a sail, you hank it on.) Chris loves having all the sails up, he watches the wind shift, fiddles with them. Like a big kid flying a kite. Three kites. Three really big kites. It’s almost enough activity for him…

We hit the Gulf Stream just a few miles offshore—hit isn’t quite right: we noticed we were in it because the water changed colour, a different blue, don’t quite know how to describe it, and clumps of Sargasso weed started drifting by. And we started drifting too.

The Gulf Stream is actually a river, 20- to 30-miles wide off the coast of Florida and flowing northward at up to 5 knots in the centre. In the light winds, we were only holding 4 to 5 knots, many of them sideways. The bow was pointing east but the boat was moving north, just a little at first then more and more as the current grew stronger.

At one point, a big ship appeared off our port bow. Fine, we thought, and it would have been if we were moving forward, but we were actually drifting right towards him: we were on a collision course. Chris realized it in time to turn our bow north and run with the current, passing harmlessly behind him. It was a weird experience.

By the time we came out of the Gulf Stream, our path on the chart plotter was a long, smooth arc running west to east. After that it went back to a straight line and it was clear sailing through the night, with a full moon all the way. We saw dozens of other ships: oil tankers and cruise ships for the most part, a handful of sailboats, some work boats plying the waters between Nassau and Freeport. And just after dawn, The Berry Islands appeared on the horizon.

Yes I know, we have a chart plotter to keep us on course, but still, with the vagaries of wind and current, not to mention unexpected course changes to avoid other ships, it still surprises me when we end out where we had hoped to. By noon, we were entering the narrow cut—and I mean narrow—into Great Harbour Cay marina.

We spent several days in the marina after clearing in, waiting for huge swells out in ocean to subside, and I mean huge—up to 24 feet in the Atlantic, a paltry 12 feet between The Berry Islands and Nassau, the aftermath of a winter storm that ravaged the eastern seaboard of the United States and Canada.

It was an interesting place, Great Harbour Cay, once a playground of the rich and famous drawn by the beautiful beaches and a championship 18-hole golf course. According to the locals, Cary Grant danced the night away in the magnificent multi-story clubhouse. Brigitte Bardot graced the beaches with her beauty. Jack Nicklaus had a house on a hilltop along the back nine.

The golf course closed after pretty much draining the aquifer beneath the island and the club house fell to ruin, but the beaches are still stunning, miles of white sand in a sheltered crescent bay. We walked them every day, looking out over the ocean to see if the swell was subsiding, sometimes stopping for lunch at The Beach Club, a tiny open-air restaurant in the dunes.

After three days the swells began to subside a little so we made a very rolly dash to a reasonably sheltered anchorage at White Cay, about 30 miles south along the string of islands. There we stayed for another three nights waiting out some big winds, which we weathered very well, our anchor having wrapped itself securely around a big rock. 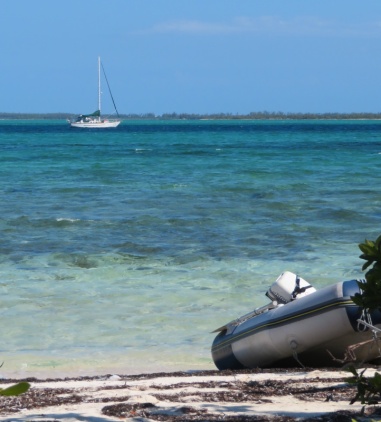 Once we’d untangled it, we enjoyed a very pleasant sail to the southernmost tip of The Berry Island, and tucked ourselves in between Frazer’s Hog Cay and Cockroach Cay. We dinghied to a narrow strip of beach and walked the road on Frazer’s Hog (and never a pig in sight) but decided not to go ashore on Cockroach Cay.

Monday night a massive cold front rolled over us with winds up to 30 knots in the squalls, but we weathered it well, our anchor firmly set in sand. By morning, the skies were clear, it was sunny, and a steady west wind had set in. Perfect weather for crossing to Nassau. So we did.

On the way, Chris managed to catch a fish head–well, he probably had the whole fish on at one time, but something made short work of it before he could reel it in. Next he caught an impressive-sized hunk of Sargasso weed. I told him that if he caught an onion and a couple of carrots, I could make a nice soup for dinner.

We’re in Nassau now, about to set out to explore the Exumas, another chain of islands in the Bahamas, these considerably longer than an eyelash. Cel signal might be sketchy, so you may not hear from us for a while. But know that we’ll be thinking of you as we swim in the clear waters, walk the sandy beaches, and enjoy a glass of prosecco on the foredeck as we watch the sun go down.

7 thoughts on “Eyelash in the ocean”