The Exumas are everything we had remembered. Pristine beaches. Impossibly blue water. Sunny all the time. We decided to take the afternoon off. (What does an afternoon on look like, you might wonder. Pretty much the same.)

We put on our bathing suits, loaded up Chris’s spear fishing gear, and headed to shore. I was going to do some swimming, he was going to hunt—which means snorkeling along the reef and looking for anything big enough to impale on a sharp, six-foot piece of steel. You can see why I prefer swimming.

We anchored the dinghy in about four feet of water, halfway between the reef and the beach. He headed for the reef and I set off at a leisurely pace along the beach, front stroke, side stroke, back stroke, then just loafing in the warm water. Mmmm. This is nice.

After a while, I swam to the beach and stood up, looked around for Chris. Oh there he is, swimming towards a coral head just a little ways beyond where the dinghy is bobbing in the water.

Hmm, I don’t remember passing two coral heads. The big one is shaped like a shark.

“Chris!” I shouted. He of course couldn’t hear me. I watched in horror as he and a huge shark converged on the coral head. He saw it just in time and turned toward shore, swimming calmly but quickly towards the beach.

We stood together in the surf and watched it work its way around the coral head then slowly back to the reef.

“When did you notice it?” I asked him.

“I was looking at little silver fishes with a pretty blue stripe on them, swimming around the coral head. Then I was looking into a great big eye. He was huge, bigger than me, at least six feet long. It looked like a bull shark to me.” 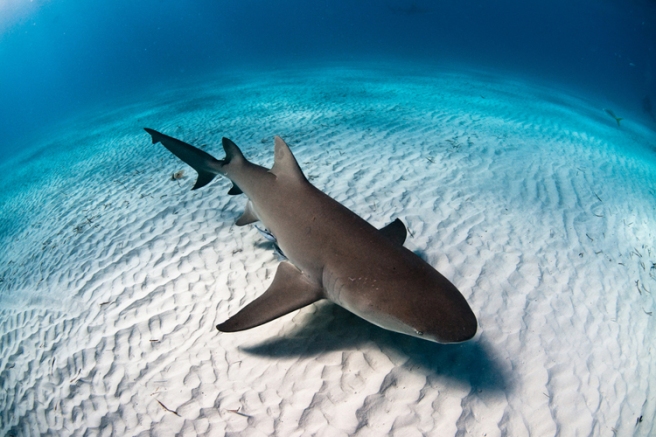 We Googled “bull shark” when we got back to the boat and found a picture. Yep. That’s what it was. They’re pretty common in the Bahamas, one of three deadly sharks to look out for—bull sharks have a reputation for being unpredictable and aggressive and are responsible for the majority of fatal incidents.

But don’t worry—there are things you can do to prevent a shark attack. Avoid swimming near cuts, where the ocean flows onto and off of the Bahama Bank with the tides (we were right beside a cut.) Avoid wearing a brightly coloured bathing suit, especially one that is “yum-yum-yellow” (Chris was wearing his yellow bathing suit.) If you see a shark, leave the water as calmly and quickly as possible. (Chris has that one nailed.)

If it looks like the shark is going to attack, there are things you can do: Fold your non-dominate arm into a V-shape with your wrist facing toward your bicep to protect your arteries and aim your elbow directly at the shark. That way if the shark bites your arm, it will be biting across two bones.